Joe’s Seafood, Prime Steak & Stone Crab – Las Vegas is turning 15 years old this fall! In honor of this milestone anniversary, here are fifteen facts about the beloved Las Vegas dining institution that you might not have known. Read on to learn more! 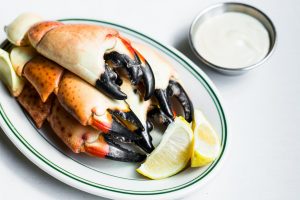 The Florida Stone Crab is a delicacy known around the world. In the wild, adult stone crabs are easily recognized by their oval body and two large claws. Fishermen are allowed to take claws at least 2 -3/4 inches long and are required to return the crabs safely to the water. The crab can regenerate its claws three to four times, making it a renewable resource and a favorite among conservationists.

The Chicago outpost was opened by Lettuce Entertain You in 2000, followed by Las Vegas in 2004 and the third location in D.C. opened in 2014.

Las Vegas is one of the top tourist destinations in the world and with thousands moving here monthly, we look forward to meeting our next 5 million guests. 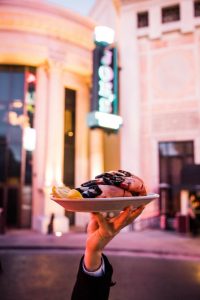 In our fifteen years, we have had the pleasure of welcoming everyone from award-winning actors and musicians to athletes and politicians into our dining room. Some of our fans include Tom Hanks, Gary Oldman, Joe Torre, Lebron James, Kevin Durant, Franco Harris, Jay Z, Eddie Murphy and Howie Mandel. Some prefer to have us bring Joe’s to them though. In fact, Celine Dion and Jerry Seinfeld often request Joe’s be brought to their dressing room when they are performing at the Colosseum at Caesars Palace. 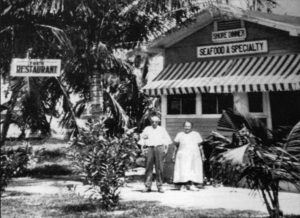 Well, not literally, but the 30-foot mural that welcomes guests from the valet stand is an actual photo of Joe Weiss and his wife Jennie in front of the first dinner house in South Beach.

Many mistake the photos for celebrities, but they are all photos of our Joe’s family – past and present –  from the original Joe’s in Miami and our sister location in Chicago.

On the opening menu from 1913, stone crab was only 25 cents! There is also a copy of a menu signed by Coretta Scott King from 1963 in honor of the 50th anniversary of Joe’s in Miami. 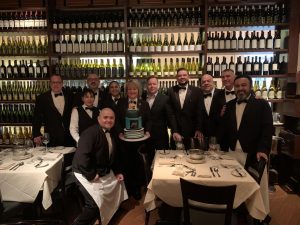 In fact, 22 current employees, representing almost every position in the restaurant, were a part of our opening crew. We are proud to call them family and look forward to having them with us for years to come.

Ever notice the shiny little crab pins that our staff wear? They aren’t just for show, rather they’re for sale with proceeds going to our Crab Pin Fund which was created by our staff to help support one another in times of need. Each year a portion of the fund is also donated to a charitable cause selected by the staff. The pins symbolize how Joe’s cares for one another and the community. 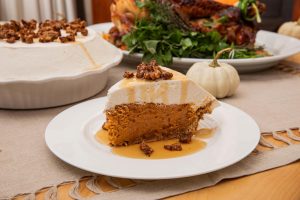 The Joe’s “Pie it Forward” program donates $1 from every slice of our seasonal pie sold to a local charity each month. These organizations do such great work to make the Las Vegas community better and we’re dedicated to supporting their efforts.

As the expanded name suggests, we also specialize in other fresh seafood and prime steaks. In fact, as a percentage, we sell more steaks than stone crab annually. 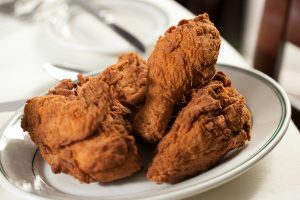 #12 – Those who are in the know, order the fried chicken

Our fried chicken is a big fan favorite, using the original recipe from our partners at Joe’s in Miami. Pro tip: Order it “chopped” as an appetizer for the whole table to share.

Thousands of people come to Las Vegas that weekend for the Big Game, and for many, Joe’s has become a tradition. Typically, we serve 2,000 people on that day alone.

Joe’s large group orders are perfect for everything from the simplest parties to larger special events. We’ve even been known to bring Joe’s to private jets!

After 15 years, we’re excited to announce we’re expanding in early 2020 with a new outdoor patio and additional private dining spaces. More details to come, so follow us on Facebook and Instagram to be the first to know!