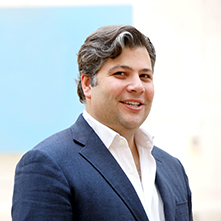 It was only a matter of time before Rich Melman, founder of Lettuce Entertain You Enterprises, would pass the torch of the restaurant empire he founded in 1971 with the opening of R.J. Grunts. Like the transfer of the crown from a king to his firstborn, Melman announced last fall that his eldest child, R.J. Melman, 38, would take over as president of the company.

The appointment had been in the works for a couple of years. “Lettuce in the future won’t look too different, but we’ll keep creating new restaurants,” says R.J. “We’ll always be a company that innovates.”

With more than 120 restaurants in nine states covering dozens of concepts, R.J. has his hands full. He, along with siblings Jerrod and Molly, has overseen a division within Lettuce including hot spots Summer House Santa Monica, Ramen-san and Three Dots and a Dash. Now he’s responsible for the entire company.
“A leader’s job is to make others successful,” R.J. says, recounting his favorite quote from his father. “That’s the role now: Make everyone in the company successful, and you’ve done a good job.”

Looking to do just that, R.J. is working to open around 10 new projects, including a couple of concepts at Midway Airport, new restaurants in the West Loop and a makeover of the Tru space in Streeterville. Through it all, he wants people to continue having fun when they go out.

“Entertainment is in our name,” he says. “We hope to keep making entertainment a part of our future.”