Jerrod, Molly and RJ Melman were all in their 20s when they opened their first restaurant, Hub 51, in 2008. It was the initial attempt by Chicago hospitality group Lettuce Entertain You Enterprises (LEYE)–co-founded in 1971 by their father, Richard Melman–to appeal to a young-adult clientele. “What we brought to the table was a more youthful energy, a bar-focused, nightlife-driven division,” Jerrod says.

The siblings’ approach was to focus on “gaps and opportunities” in LEYE’s existing businesses. “We evaluated the hours and saw that at 11 p.m. most of the company’s restaurants were shutting down, but we wanted to be gearing up for the second phase of the night,” Jerrod says. After meeting the owners of popular Vegas nightclub Tao, they took a gamble on starting a venue that would capture the interest of patrons coming out of dinner. In June 2011 they opened Studio Paris, an indoor-outdoor nightclub that now hosts the official after-party of the Lollapalooza music festival. 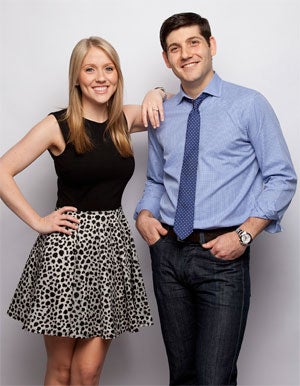 The Melmans are eager to give customers what they crave: new experiences. The siblings built on the idea that they are their target demographic–so the food and drinks, as well as the décor, cater expertly to the changeable whims of a younger crowd. (Hub’s menu has been described by some critics as “schizophrenic,” with hummus, sushi and enchiladas on the same page.) Music is also a big part of the experience, with guest DJs like Kaskade and Calvin Harris performing at Studio Paris, and top country artists taking the stage at Bub City’s Windy City Smokeout, a summer BBQ fest.

2013 revenue is expected to total $90 million from the initial nine venues. Meanwhile, the division this year has plans for two other Chicago restaurants: RPM Steak, a second venture with TV personalities Giuliana and Bill Rancic that will have an extensive menu of raw-bar items and focus on top-quality aged meats; and Three Dots and a Dash, a 4,000-square-foot tiki-theme bar. “Tiki is a genre that fell by the wayside, and we want to bring it back in a cool, new way,” Jerrod says, citing seasonal syrups made in-house, large-format drinks for sharing and a menu with more than 150 rums.

But the best strategy of all? Asking your kids for an innovative take on the business.