The holidays are over and it’s frigid outside – no wonder we’re dreaming of sunny islands and rum-soaked tropical drinks.

But we’re not the only ones: creative bartenders are keeping tiki front and center with unique drinks and concepts. Author and tiki guru Jeff “Beachbum” Berry’s new Latitude 29 is making headlines in New Orleans, while thirsty New Yorkers already are dusting off their Hawaiian-print shirts to turn out for the Tiki Monday pop-up at Pouring Ribbons on January 19. And there’s more tiki buzz still on the horizon: Paul McGee (formerly of Chicago’s Three Dots and a Dash, now with Land & Sea Dept.) is teaming up with San Francisco’s Martin Cate (Smuggler’s Cove) to open Lost Lake Tiki in Chicago’s Logan Square in mid-January.

Here are 10 bars and restaurants where the drinks, food or decor transport you to the tropics, tiki-style, albeit with a modern twist. And just for fun, we’ve asked each bar how many rum bottlings each keeps behind the bar — check out who takes the top spot. 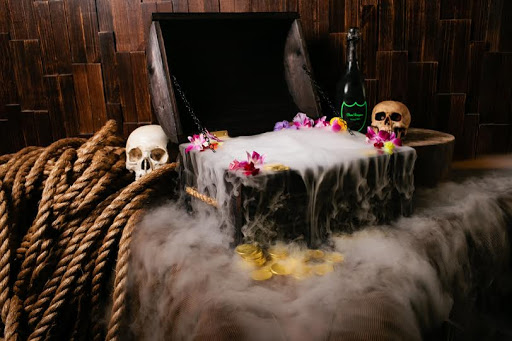 Three Dots and a Dash, Chicago

Description: A cross between a tiki lounge and a speakeasy, this buzz-y tropical basement bar has been racking up the awards since it opened in July 2013. Many of the fixtures are genuine pieces of tiki history, bought at auction from the original Trader Vic’s in the Palmer House Hotel that opened in 1957. When Paul McGee left in November, some wondered about the bar’s fate; but beverage director Diane Corcoran, who started with McGee from the beginning, currently is helming the ship.

Must-Order Drink: Treasure Chest No. 2 (pictured). Served in “treasure chest” with aged Jamaican rum, blackberry, pomegranate, pineapple, lemon and falernum. At $400 it’s not a bargain, but it’s intended to serve six to eight pirates and comes with a bottle of Dom Pérignon.

Number of Rums Behind the Bar: 220